Exit Thoughts on Steampunk Hands Around the World. Musings from Steampunk India.

This video was shot for my EuroSteamCon 2013 contribution. I was asked to talk about what Steampunk specifically means to me and it seems that everything I speak about here is extremely relevant to the thoughts behind the Steampunk Hands Around the World initiative.

Today is the last day of a month filled with blog posts, events, shared links, special music offers and articles with the central theme of community and sharing within the Steampunk movement.
It has been a fascinating and uplifting experience; I have in fact done exactly what the mission statement suggested at the beginning of the month:
I have made new contacts, from Chile to Hawaii and gained an insight in how the Steampunk genre is expressed in other cultures.
Thank you Kevin D. Steil of the Airship Embassy, for asking me to be involved: I will certainly board the Dirigible of Diversity next year and will keep my fingers crossed that even more countries will do so, too.
Happy International Steampunk Month, one and all, here’s to breaking boundaries!

Steampunk Hands Around the World – by Thadeus Tinker

Under the guiding hand of “Airship Ambassador” Kevin D Steil a group of steampunks from around the world have been talking about a global initiative to get steampunks to forge new links and friendships. This has long been a dream of mine too. I am very fortunate, I have managed to physically travel to many countries in the past and have always been delighted to visit new places and make new friends. More recently I have enjoyed attending steampunk events in several countries. I also have steampunk friends across the globe – some of whom I have yet to meet physically but due to the miracles of modern technology feel I can share ideas and dreams with.

The “Mission Statement” for hands around the world is posted here along with a link to Kevin’s introduction to the project.

“Mission Statement: Steampunk Hands Around the World is a month long event…

Filed under Articles by Others

Last year I travelled especially to the Castlefest 2013 event in Lisse, The Netherlands, to meet up with Dutch Steampunk Captain Constance Bashford.
We had had contact via the Internet for about a year, sharing ideas and thoughts on Steampunk.
When we met in person at last, we were joined by professional photographer Ruud de Korte, who captured this East Meets West encounter for posterity.

Constance was a lovely, typical Dutch lady in many ways: very tall, affable, welcoming and instantly easy to get along with. Her intrepid Steampunk Airship Captain was a great match for my Steampunk India Spy character.

Constance has been a Steampunk model for four years and has done some exquisite shoots, both with Ruud de Korte and several other photographers.
For myself, being mostly a writer who uses photo shoots and costuming as a tool for fictional character development and inspiration, the sweltering hot hour of modelling was a trifle challenging… Even with my experience as a professional singer in various bands and doing photo’s and press! 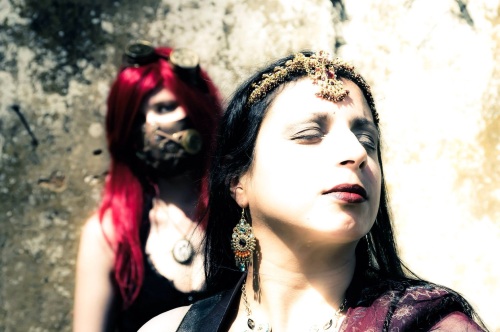 I had a fantastic afternoon at the Steampunk Garden in the grounds of Castle Keukenhof. The Dutch Steampunk Objective society had provided the setting and organised several performances and activities throughout the day.
There were many new fellow Steampunks to meet, a laboratory tent to visit and several wondrous strange contraptions to admire which were dotted around the garden.

Two young ladies, to whom I was a complete stranger, took me under their wing for two hours and quite literally walked me around the entire festival grounds, showing me points of interest, where the main stages were and where I could find my dinner once I became peckish.
It was a perfect example of hospitality and acceptance among Steampunks and we are keeping in touch to this day. 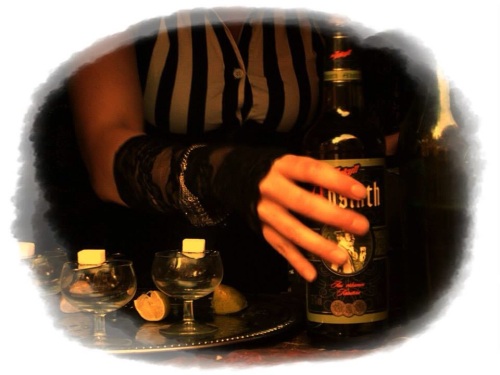 I found it gratifying – though also a tiny bit sobering – that a few folk (including Constance’s lovely friend Emma, who is a gifted Steampunk costume and accessory maker) commented on my Steampunk India attire and exclaimed that something like that hadn’t occurred to them before… I consider the seeds sown in that regard: hopefully more exotic interpretations will become more de rigueur until they are a part of the whole Steampunk genre in the Netherlands as well. This gentleman has certainly taken some power back and lent his own twist to previously solely colonial garb:

The photo’s that were taken of Constance and myself have today become available to me. She and I briefly lost touch due to circumstances and have recently reconnected again, to my great pleasure.
This presents a great opportunity, therefore, to publish these photo’s and an account of my adventures in Holland, exclusively for Steampunk Hands around the World.
To further relations between potential new friends, below the links of people and places involved:

Madeline Holly-Rosing, creators of the Boston metaphysical society webcomic on how a fictionalised version of inventor Granville Woods came to be an integral part of the narrative.

When I first started developing the story of Boston Metaphysical Society, I wanted it to be representative of the American experience. Meaning it needed to include people of different classes, women and people of color.  I already had the characters of Samuel Hunter and Caitlin O’Sullivan pretty well mapped out, but I wanted to bring a different sensibility to the “team” I was creating.  I already knew that Bell, Edison, Tesla and Houdini were going to be part of the mix, but I wanted to see if I could find their contemporary in the African American community. Low and behold, after some research I discovered Granville Woods.

He was born in Columbus, Ohio in 1856 to free African-American parents, though some accounts claim his mother was part Native American.  Whether Woods had a little schooling or a lot during his formative years is a subject of debate…

Filed under Articles by Others

Whilst working on my own contribution, hereby a random selection of what has been happening around the world so far.

For SteampunkHands, an Article by Ray dean on Victorian Place Based Inspiration

When a Steampunk friend clued me into a call by Kevin Steil of Airship Ambassador for participants in his February 2014 “Steampunk: Hands Around the World,” I was more than happy to think of a number of fun things to do…

Today, we’re talking about INSPIRATION!  Ideas you can get from a place… a window… a doorway… a dark path… a once-proud stone visage of a building.

I’ve asked a number of Steampunks from around the world to send me pictures of Victorian Era locations that they are familiar with. They’ll let us know what the buildings were used for in the Era of Steam and then give us a quick idea or two of what that building could be when used to inspire a fertile Steampunk imagination!

FIRST up – Dover Whitecliff and I share a common past… our school! We were both graduates of…

Steampunk Hands Around the World – Welcome

Welcome to Steampunk Hands Around the World, a month long celebration of the global steampunk community, presented by nearly one hundred steampunk creators from around the world.

Our community is an energetic force of creativity, education, and aspiration, which deserves to be expressed, shared, and valued by each and every one of us, every day.

Our friends and compatriots, known and not-yet-met, create the stories we read, make the fashions and accessories we wear, perform the music we hear, and construct the art we see. All of this, together, creates the experiences and inspirations we enjoy together. This grand collaboration makes our steam-nation possible, not just to exist but to thrive. Steampunk and our community is our playground. It is our classroom. It is our workshop.

Namaste and welcome to the launch day of this month’s Steampunk Hands Around the World event! It has garnered so much advance attention already it has been dubbed International Steampunk Month by several press and blog sources!

Enjoy the special efforts that are being made this month with blog posts, special fiction pieces, art projects, local events and much more, celebrating the global phenomenon that is Steampunk.
We hope to bring more nationalities together than ever to collectively enjoy this wonderfully versatile movement and to transcend some of the ‘shoulds and shouldn’ts: If Steampunk is an Empire, then all the people should have a voice and have a creative platform to give their vision shape and substance.
So, hop on this Dirigible of Diversity and have yourselves a splendiferous time, however you participate!

The opening blog is by event initiator Kevin D. Steil, also known as the Airship Ambassador: 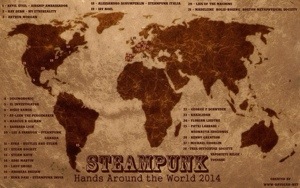